Data analytics and visualization play an integral role in the scientific process - allowing a way to see the unseen by creating images of experimental data or theoretical simulation results. The projects listed on this page represent recent or current collaborative efforts between the CRD Data Analytics and Visualization Group and others performing scientific research in both simulation/computational and experimental sciences. 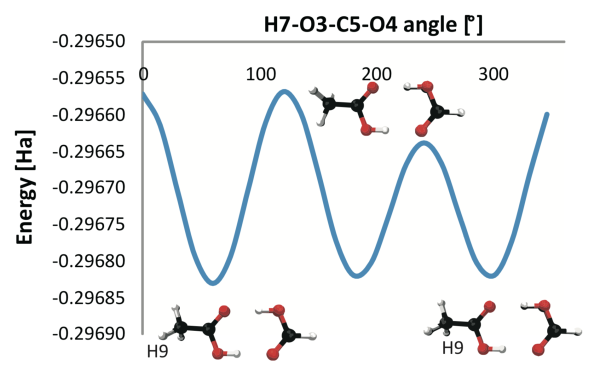 A detailed study how different approximations of functions given as samples at discrete locations influences the result of topological analysis. (More information)

Accelerating Optimization of a Probabilistic Graphical Model through Data-Parallel Primitives 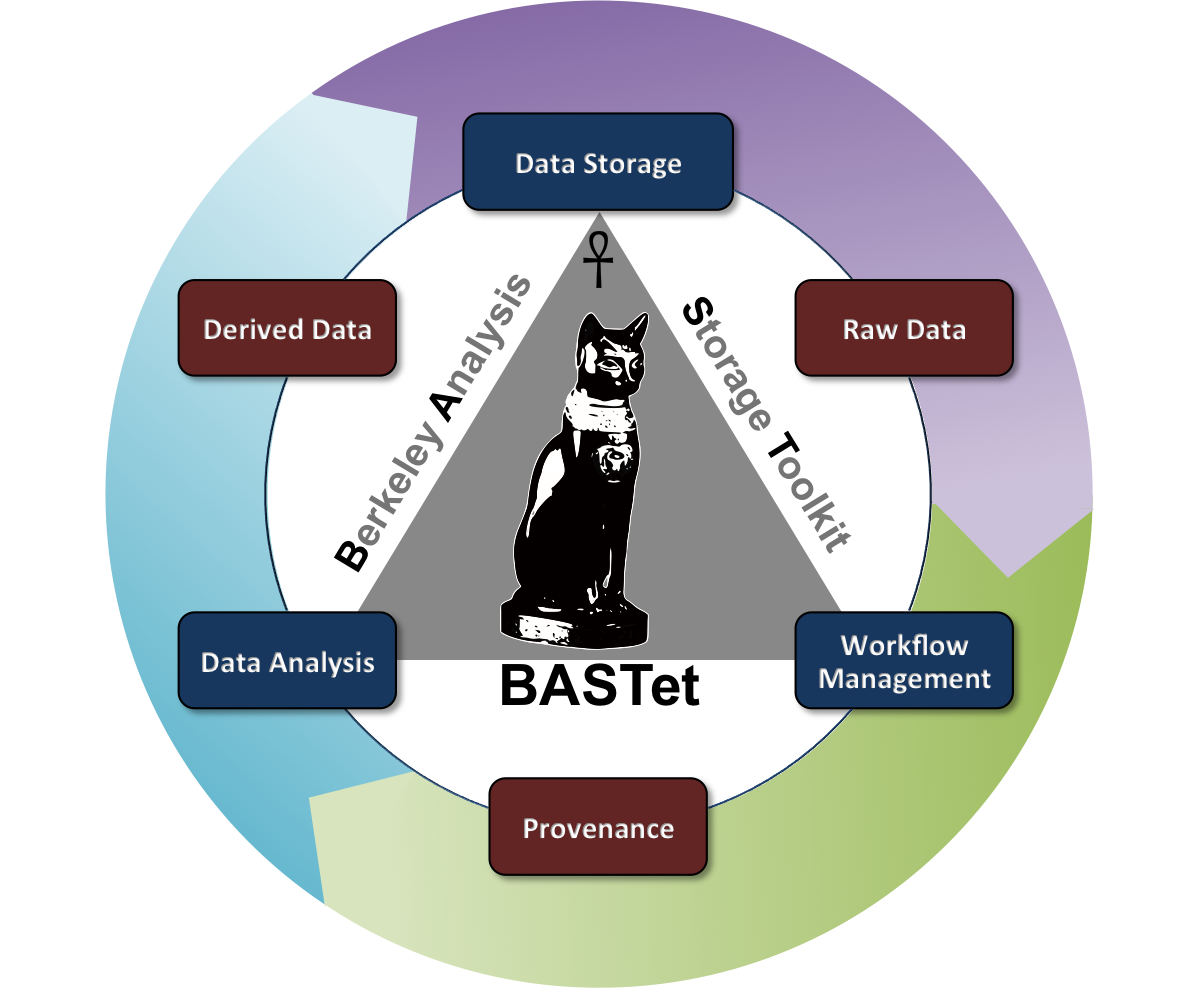 For more information see the BASTet homepage as well as the IEEE TVCG article on BASTet. BASTet has been released to the public; Sources (GitHub) and the Online Documentation.

NWB:N – Beta of Neurodata Without Borders 2.0 Format and Software Released 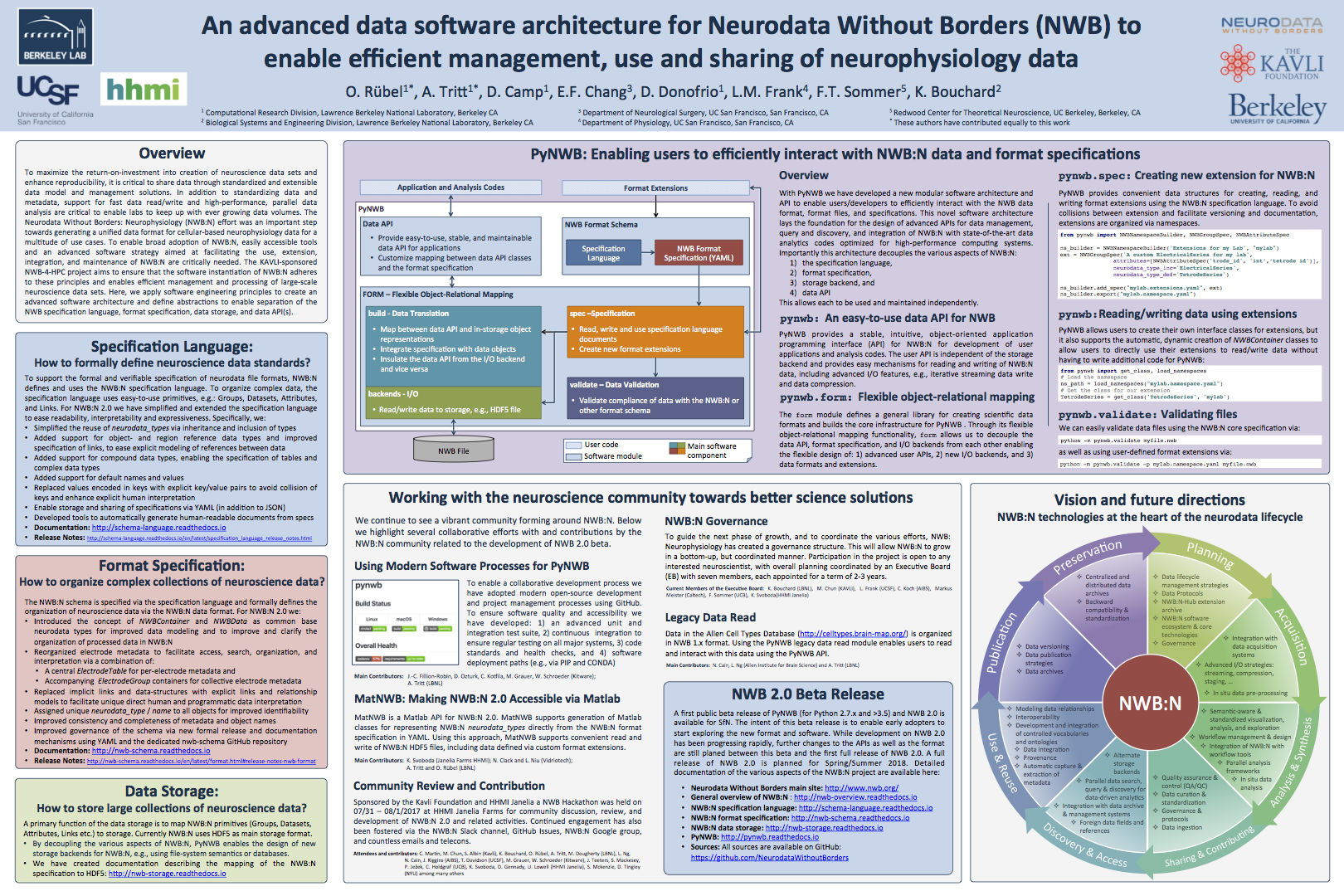 Neurodata Without Borders: Neurophysiology (NWB:N) is a project to develop a unified data format for cellular-based neurophysiology data. The NWB:N team consists of neuroscientists and software developers who recognize that adoption of a unified data format is an important step toward breaking down the barriers to data sharing in neuroscience. Neuroscientists can now explore a beta version of the new Neurodata Without Borders: Neurophysiology (NWB:N 2.0) software and format.

For more information download the PDF of the poster by clicking on the image on the left and see the following LBNL news article. The NWB:N format schema and PyNWB Python API have been released to the public online on GitHub. 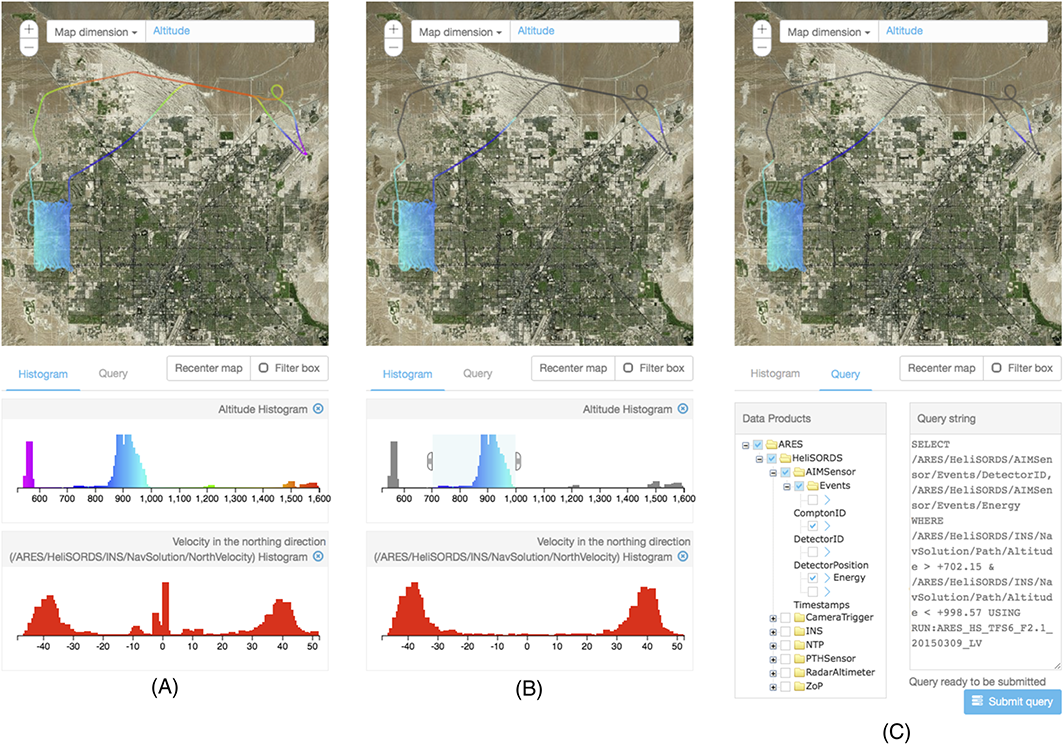 New technique makes it easier to see how features in simulations are related and how they evolve. (More information)

A 10-fold performance over a state-of-the-art approach results from a novel algorithmic design of maximal clique enumeration (MCE), a key graph analytics method. The novelty is the use of data-parallel primitives (DPP), a non-traditional programming model. (More information) 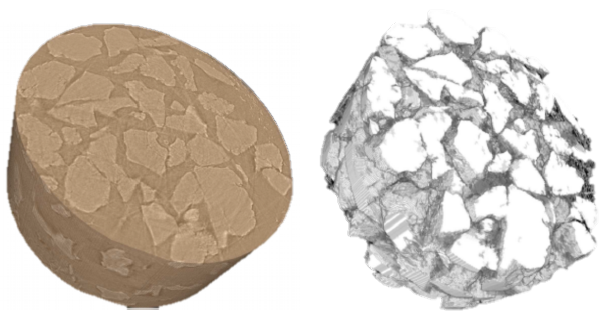 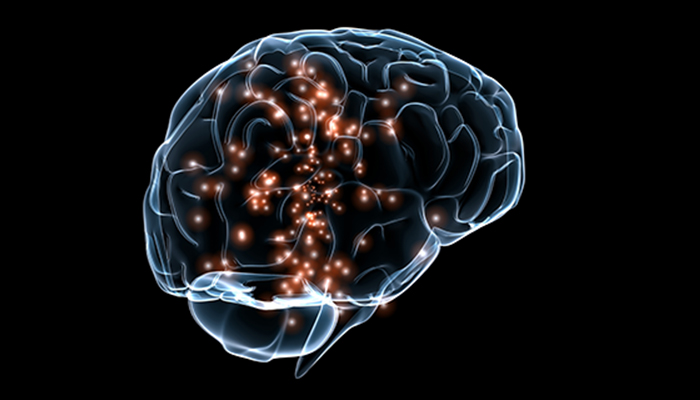 Thanks to standardized image file formats—like JPEG, PNG or TIFF—people can easily share selfies and other pictures with anybody connected to a computer, mobile phone or the Internet, without having to download any special software to see the pictures. But in many science fields—like neuroscience—sharing data is not that simple because no standard data format exists. The BrainFormat library developed at LBNL specifies a general data format standardization framework based on the widely used HDF5 format and implements a novel file format for management and storage of neuroscience data, in particular Electrocorticography (ECoG) data.

For more information see the following LBNL news article as well as the Frontiers in Neuroinformatics article. The BrainFormat library has been released to the public and is available online at bitbucket.org. 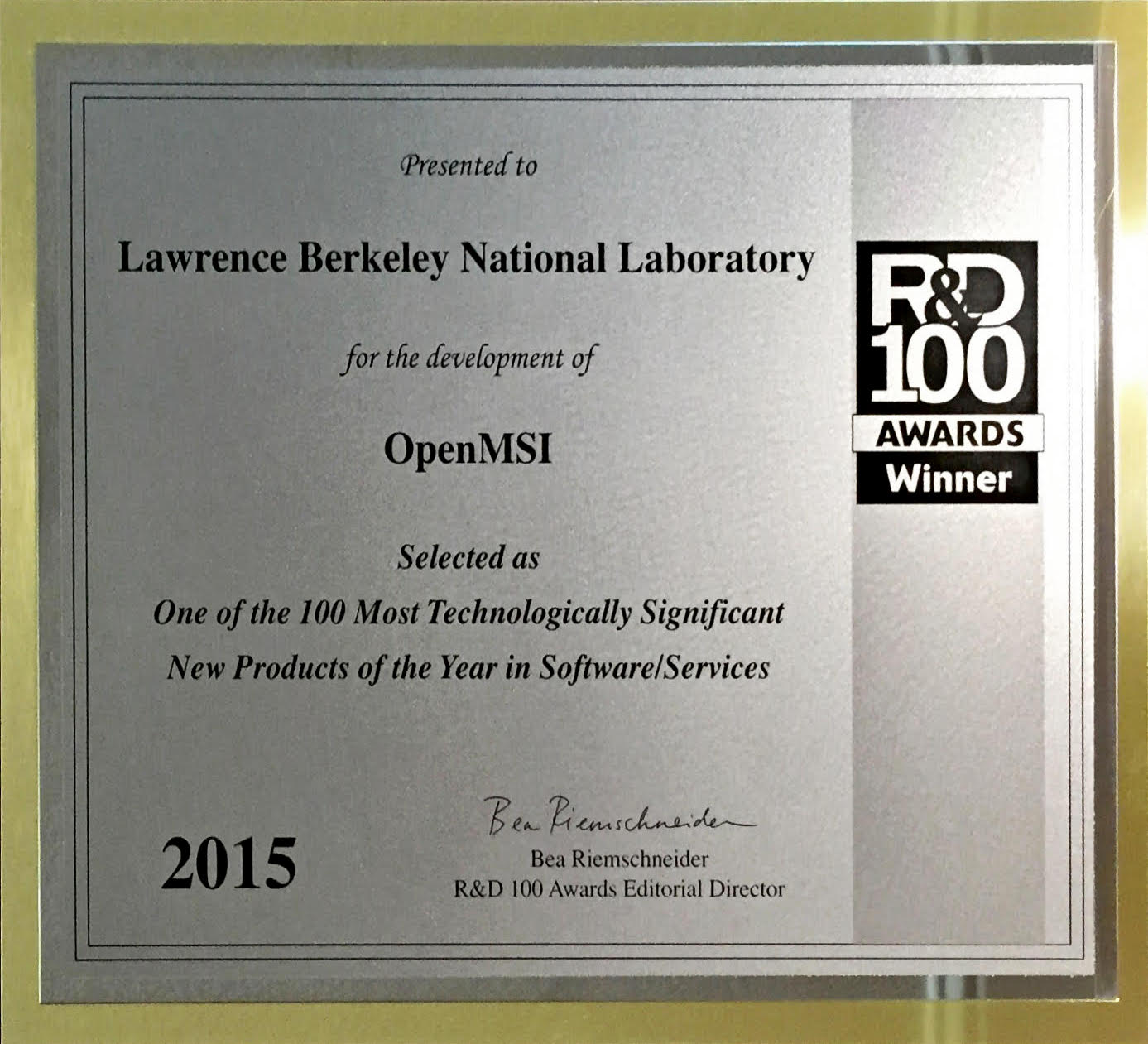 The OpenMSI software/service developed by Oliver Ruebel and Benjamin P. Bowen (LBNL) was selected as “One of the 100 Most Technologically Significant New Products of the Year in Software/Services.”

For more information see the following LBNL news article. For a full list of award winners see here. OpenMSI has been released to the public and is available online at openmsi.nersc.gov.

This research leverages petascale simulations of the Earth’s magnetosphere to study the physics and dynamics of space weather phenomenon. A radial interplanetary magnetic field(IMF) configuration was studied. Such configurations are common during high intensity solar storms when the solar wind becomes highly turbulent. The study is based upon one of the largest global simulations of the Earth’s magnetosphere ever made. The simulation ran on 150,000 cores for 368 hours, for a total of approximately 55.2 Million core hours. The fields and derived quantities are kept on a 1024x2048x1024 grid, and 1 Trillion Particles were simulated. The simulation produced more that 128 TB of analysis data. The NERSC DAS group applied parallel visualization and analysis techniques using ParaView, VTK, and POVRay. Including interactive and batch volume rendering on Edison using ParaView on 256 cores, and batch mode ray tracing using POV-Ray on 36,000 cores. (More information)

Using NERSC’s Cray XC30 supercomputer “Edison”, University of Michigan researchers found that the semiconductor indium nitride (InN), which typically emits infrared light, will emit green light if reduced to 1 nanometer-wide wires. Moreover, just by varying their sizes, these nanostructures could be tailored to emit different colors of light, which could lead to more natural-looking white lighting while avoiding some of the efficiency loss today’s LEDs experience at high power. Visualization and analysis of the simulation data were done using custom tools based on VTK, ParaView, and finally rendering the result with POVRay. The visualizations appeared on the cover of ACS Nano Letter, on NERSC web site, and were made into a stereoscopic 3D presentation for SC14. (More information)

OpenMSI: A Science Gateway to Sort Through Bio-Imaging’s Big Datasets

OpenMSI is a collaborative research effort with the goal to make the most high-performance, advanced data management, model building, analysis and visualization resources for mass spectrometry imaging accessible to scientists via the web. The development and application of cutting-edge analytical methods is a core driver for new scientific discoveries, medical diagnostics, and commercial-innovation. Mass spectrometry imaging (MSI) holds the promise for being a transformative technology for advanced studies of metabolic processes with broad applications in life sciences, bioenergy, and health. MSI enables fast assays of microbial metabolism essential in bioengineering problems common to the development of biofuels, drugs, and diagnostics for cancer and other diseases. While the data can be routinely collected, the broad application of MSI is currently limited by the lack of easily accessible analysis methods that can process data of the size, volume, diversity and complexity generated by MSI experiments. The OpenMSI project will overcome these challenges, allowing broad use of MSI to researchers by providing a web-based gateway for management and storage of MSI data, the visualization of the hyper-dimensional contents of the data, and the statistical analysis.

More information is available in the following LBNL and science.energy.gov news articles as well on the OpenMSI project website.

Flying Through the Known Universe in 3D

CO2 Sequestration and Storage: From Raw Micro-CT to Quality Measurements

Working closely with earth sciences researchers, we have developed a collection of algorithms and software tools that helps scientists to conduct quantitative analysis of 3D imaging data in order to better understand how to store CO2 in geologic reservoirs. (More information)

Stream surfaces, a useful flow visualization technique, are difficult to compute accurately and efficiently on large, parallel platforms. Our team has developed a new algorithm that addresses both of these challenges. (More information)

The U.S. Department of Energy’s (DOE) Office of Environmental Management (DOE/EM) supports an effort to understand and predict contaminant fate and transport in natural and engineered systems. Geologists, hydrologists, physicists and computer scientists are working together to create models of existing, contaminated sites, and to simulate their behavior. Simulation results are verified based on historical data and extrapolated into the future. Visualization is used for model setup verification, visual analysis of high-performance computing simulation results, and uncertainty quantification.

The SEC and CFTC recently proposed the development of a Consolidated Audit Trail System (CATS), a next-generation system for market monitoring. The goal of our work has been to evaluate how high-performance computing can support financial data analysis and, in particular, the development and implementation of early warning systems for detection and analysis of market anomalies. (More information)

Three-dimensional gene expression PointCloud data, generated by the Berkeley Drosophila Transcription Network Project (BDTNP), provides quantitative information about the spatial and temporal expression of genes in early Drosophila embryos at cellular resolution. The goal of this work has been to maximize the impact of BDTNP PointCloud data by integrating the visualization system PointCloudXplore with Matlab to: i) make PointCloud data easy to comprehend for developers, ii) to enable developers to deploy their analyses within the context of an advanced easy-to-use visualizations system, and iii) to make novel, advanced analyses capabilities easily accessible to biologist users. (More information)

Query-driven analysis based on single timestep queries is a versatile tool for the identification and extraction of temporally persistent and instantaneous data features. Many questions of interest —such as, which particles become accelerated, which locations exhibit high velocities during an extended timeframe, which particles reach a local maximum energy, or which particles change their state— inherently depend on information from multiple timesteps and cannot directly answered based on single-timestep queries alone. The goal of this effort is to extend our query-driven analysis capabilities to enable scientists to formulate time-dependent queries that accumulate information from multiple timesteps, here called cumulative queries. (More information)

The goal of this work is to enable high-throughput screening of large material databases to characterize material properties and enable fast identification of candidate materials for application-specific problems such as carbon capture. (More information)

Studies show up to a 30x performance gain is possible on some codes and platforms depending upon settings for tunable algorithmic parameters, algorithmic optimizations, and use of device-specific features. (More information)

Parallel I/O, Analysis, and Visualization of a Trillion-Particle Simulation

First-ever trillion-particle runs of a plasma physics code, the computer science research needed to enable this feat, and the science discoveries that result. (More information) 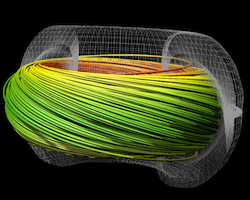 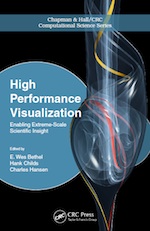 Visualization and analysis tools, techniques, and algorithms have undergone a rapid evolution in recent decades to accommodate explosive growth in data size and complexity and to exploit emerging multi- and many-core computational platforms. High Performance Visualization: Enabling Extreme-Scale Scientific Insight focuses on the subset of scientific visualization concerned with algorithm design, implementation, and optimization for use on today’s largest computational platforms. (More information)